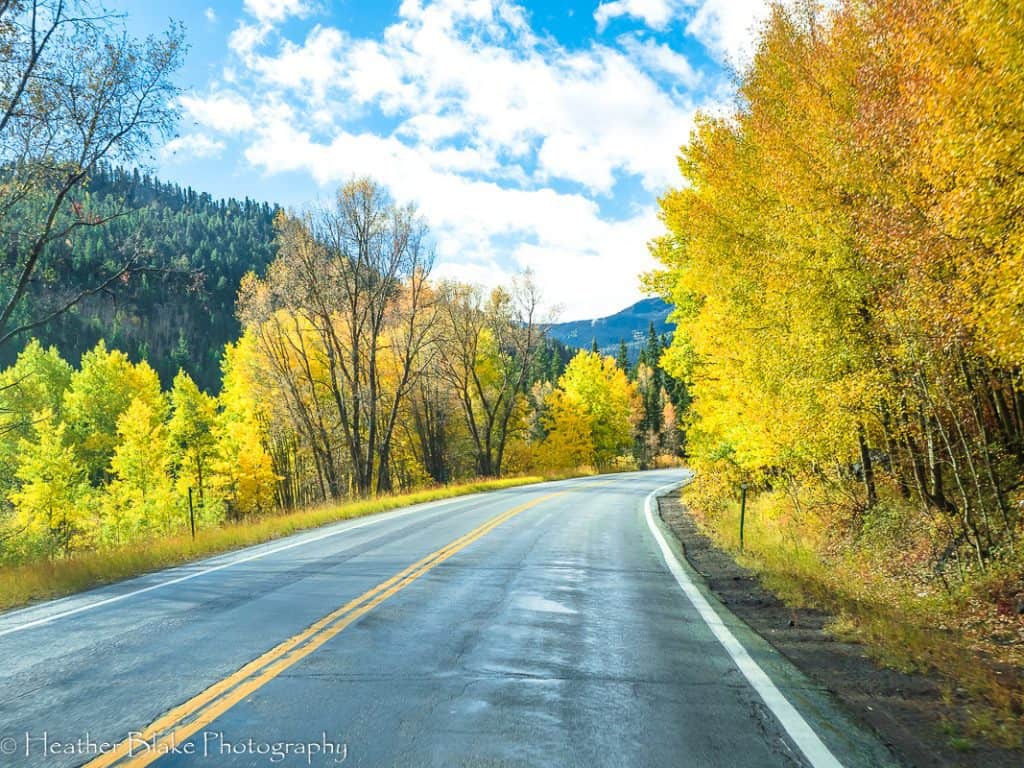 All the colorful aspen trees seen from the road while driving along the Silver Thread Scenic Byway in Colorado. We lucked out with the timing on this trip for sure!

This autumns road trip began, as always, through Colorado. This trip was different though, we were blessed with the brilliance of changing aspen leaves on the way out of town which came a few weeks late this year! Follow along as we drive along the Silver Thread Scenic Byway!

Highway 149 or better known as the Silver Thread Scenic Byway begins in Gunnison, Colorado and ends in Silver Fork. This intensely beautiful road winds through the San Juan Mountains and passes through the historical towns of Lake City, Creede and Silver Fork.

There is an abundance of marked pull-outs (for viewing some amazing scenery), historical markers galore, and geology markers along the route all of which are worth pulling over for!

The Silver Thread takes you through some of the most remote areas of Colorado as well as offering some of the best views in the state. The paved road is open year-round and is accessible by all vehicles. There is also an abundance of camping available and other recreational activities to do as well!

I highly suggest taking a trip down the Silver Thread Scenic Byway. It’s certainly one of the prettiest drives that I have ever taken!

We began our route for the Silver Thread Scenic Byway at the Blue Mesa Reservoir which is in the Curicanti National Recreation Area. Oddly enough, we were here a couple of months back.  It gave me the idea for this trip with which way to get to Southeast Utah. It’s a way that I haven’t been in 30 years and was excited to experience it again.

So here we go! We actually stayed at the Stevens Creek Campground this time around as it is directly on the lake and is right next to the entrance for HWY 149. This campground is quite pretty and offers tremendous views. It was also EMPTY this time of year. Which is what we like so we pulled in for the night. 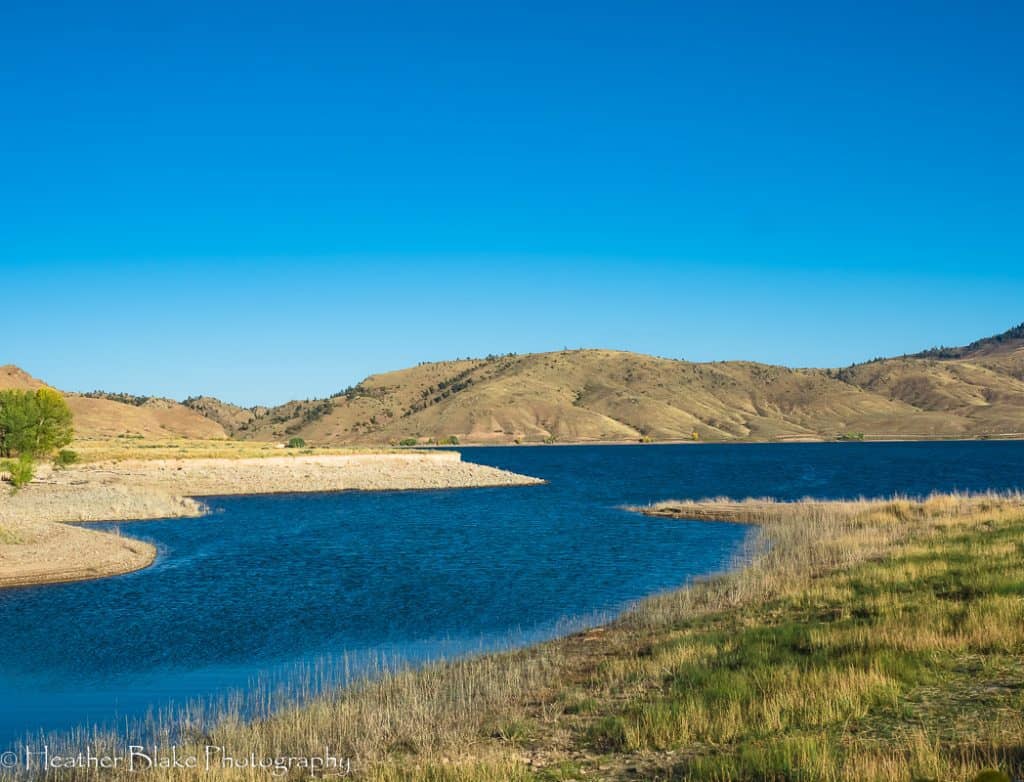 A picture from our camp spot on Blue Mesa Reservoir. Not bad in my book! 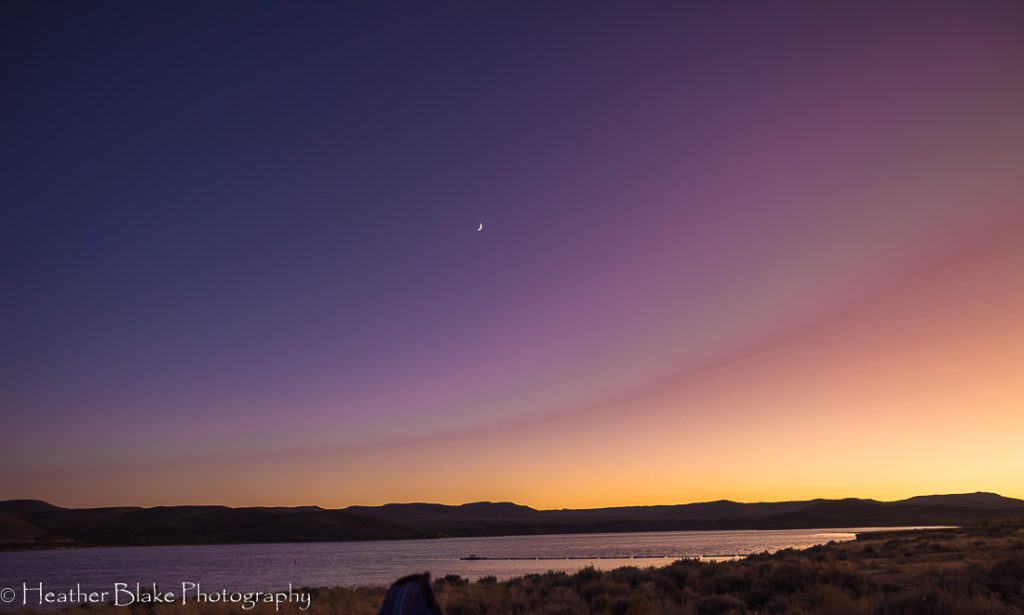 Wow! This was a pretty sunset over Blue Mesa Reservoir! Look at all the layers of color! 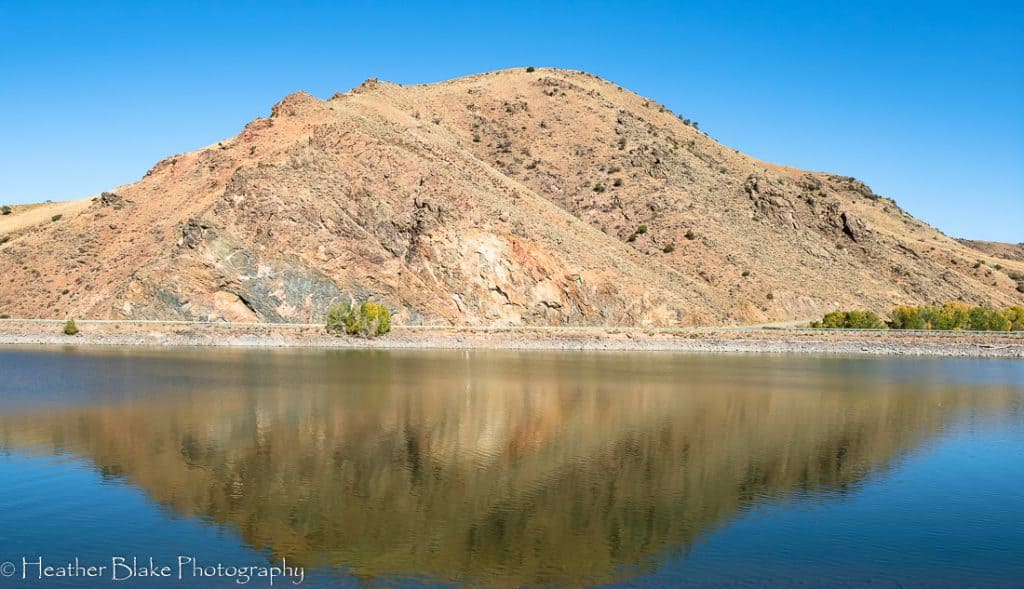 Lake City, Colorado is a cool and beautiful town located smack dab in the middle of the San Juan Mountains. The town is on the National Register of Historic Places and has a designated Historic Downtown. It still has many of its original buildings from the mid-1800s when it was a supply town for the neighboring mining communities. It’s super neat to see as it’s one of the best-preserved historic downtowns that I have seen on my travels.

Make sure to stop and spend some time in Lake City, grab some lunch and maybe do a bit of shopping. It’s also a great place to start your day for hiking, fishing, hunting or just some amazing 4-wheel drive trips!

Slumgullion Pass is a high mountain pass just east of Lake City. As you can see from my pictures it is certainly one of the most scenic drives that we have been on. In terms of mountain passes go, Slumgullion Pass isn’t a difficult road and it’s open year-round for travel. There are many places to pull-over to check out the scenery and read about some strange history (Alford Packer, the cannibal)… Below are a few of my favorite pull-offs.

Well, if you are like me, you have never heard of an “earth flow” before. Just think of an “earth flow” as something like a glacier, it’s just a slow-moving landslide. The first earth flow is only about 700 years old and the current flow has been moving about 20 feet a year for the past 300 years or so. Lake San Cristobol was formed because of the earth flow and is the 2nd largest natural lake in the state. You can see the end of the flow in the top part of the lake in the picture below.

Useless information alert… Slumgullion Pass got its name because the pioneers thought the “yellow” nature of the mud from the earth flow looked like slumgullion stew. Not sure that I would like that type of stew, but it would be fun to make it sometime! 🙂 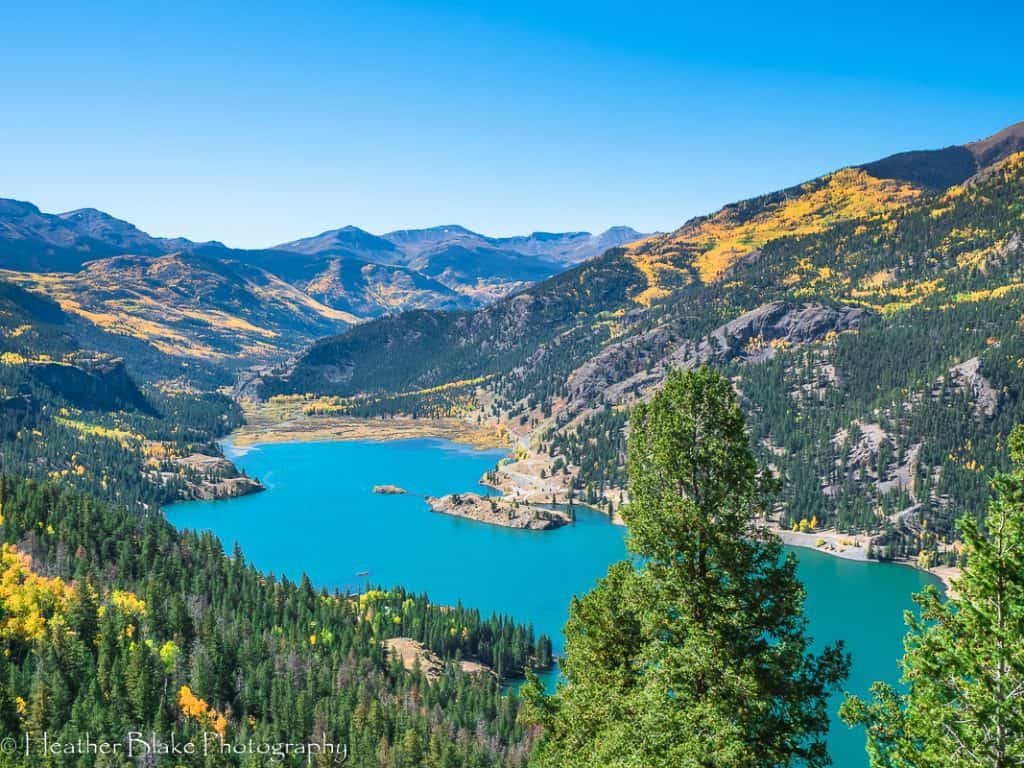 I’m sure that you would agree, Lake San Cristobol is one of the prettiest natural lakes out there! We won the jackpot with the changing aspen trees and a crazy blue sky!

Near the top of the Silver Thread Scenic Byway, there is a pullover for viewing the Uncompahgre Peak wilderness area. I’m still pinching myself on how we hit the peak of the Aspen season in this part of the state. As you can see, it was not only a perfect bluebird day, the changing colors were simply glorious!

I have to mention the Uncompahgre Peak in the background. The tallest of the “fins”, Uncompahgre Peak, is a “fourteener” reaching 14, 321 feet high. It is the 6th highest peak in Colorado and in the United States. It’s certainly one of the oddest looking mountains that I have seen which makes it so impressive. I’m sure that you would agree! 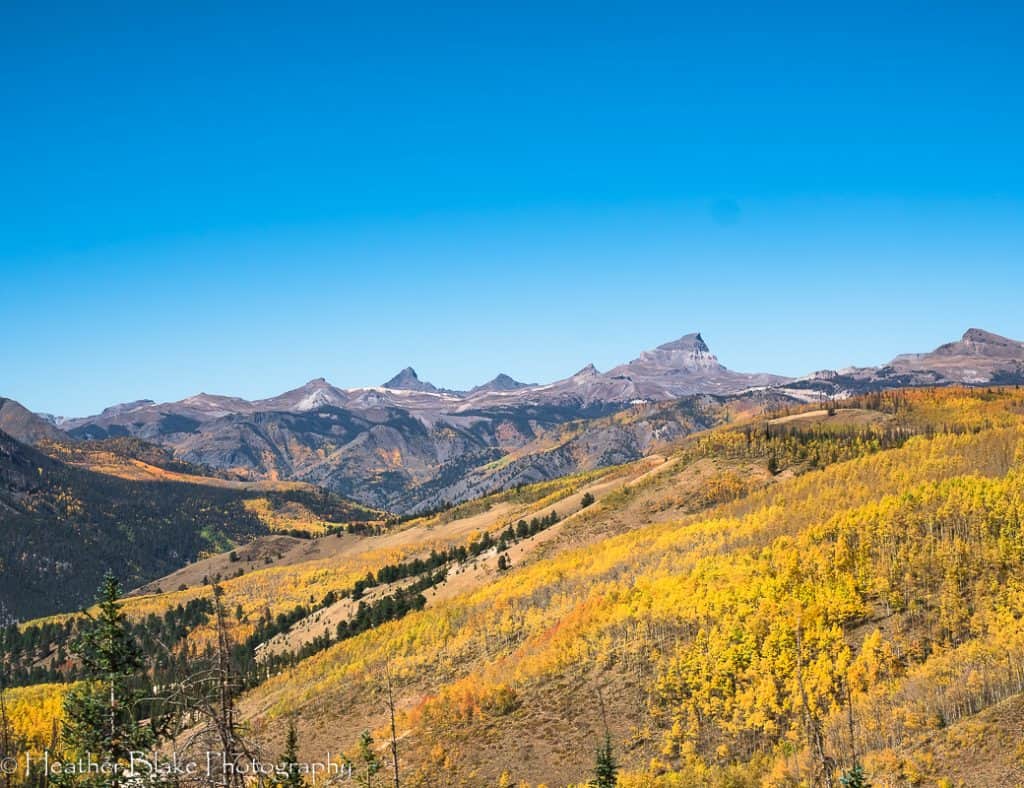 Wow! Check out Uncompahgre Peak and the “fins” that lead up to it! This is one of the most unusual mountains that I have ever seen! 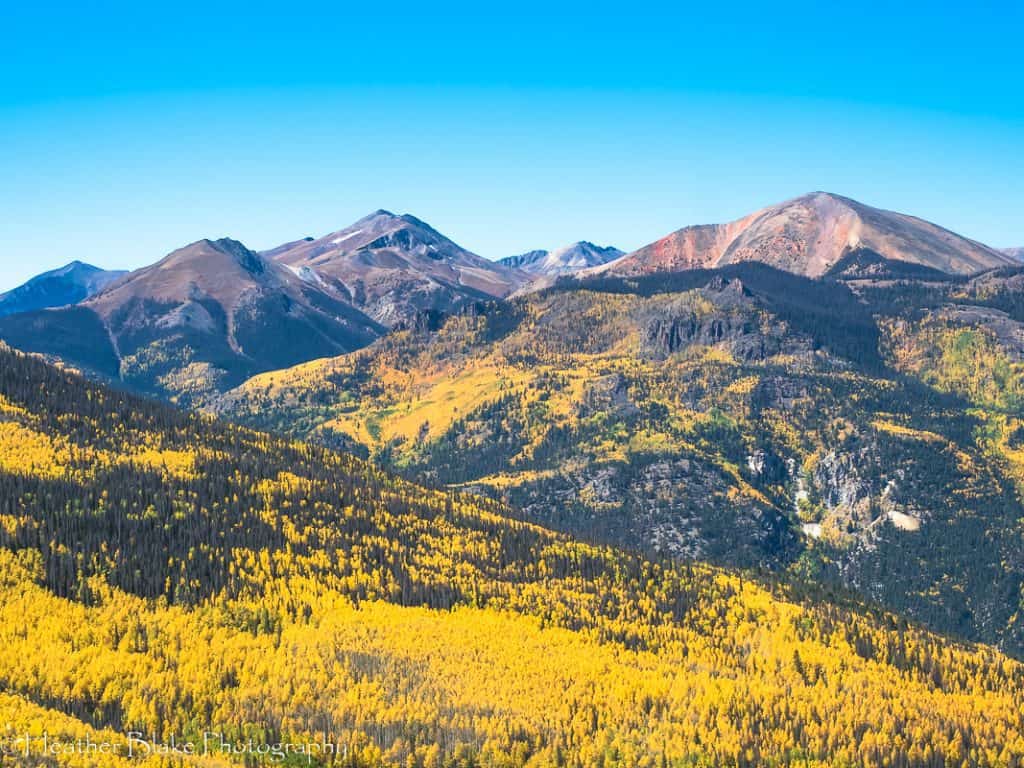 From the overlook on top of Slumgullion Pass, you not only get to see Uncompahgre Peak but the continuation of the range. I am still in awe of how beautiful the changing aspen trees were! It was just brilliant!

As you continue on the Silver Thread Scenic byway you will come to the town of Creede. Creede is just another great old west town on this trek. It has a super downtown and some great old west gangster history.

It is a tiny town but it has a statue of the largest “fork” in the United States. It’s touted as the “weirdest” roadside attraction in the state which is funny because when we drove by it, I said, “that’s weird, a giant fork”. What’s even weirder, this was a birthday present for a woman in the town. Oh, the crazy things that you learn traveling!

Creede has also been a backdrop to old western movies and even has a repertory theater that has been named by USA Today as one of the top 10 places to see the lights off-Broadway.  Stop in Creede. It’s a cool place!

Below are two pictures of worthy stops near Creede! You can’t miss them… 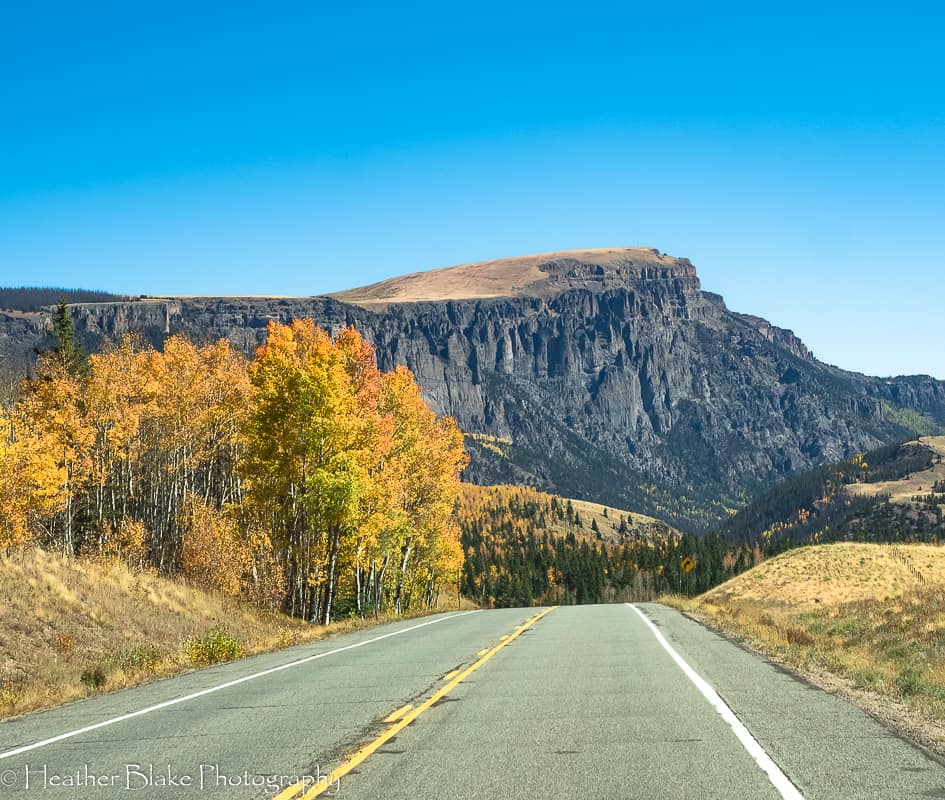 Bristol Peak is a beautifully unusual peak near Creede. Crazy fact, the mountain was named by a man who missed his home town of Bristol, UK. No matter how it got its name, it sure is gorgeous and the light was just perfect for this picture! 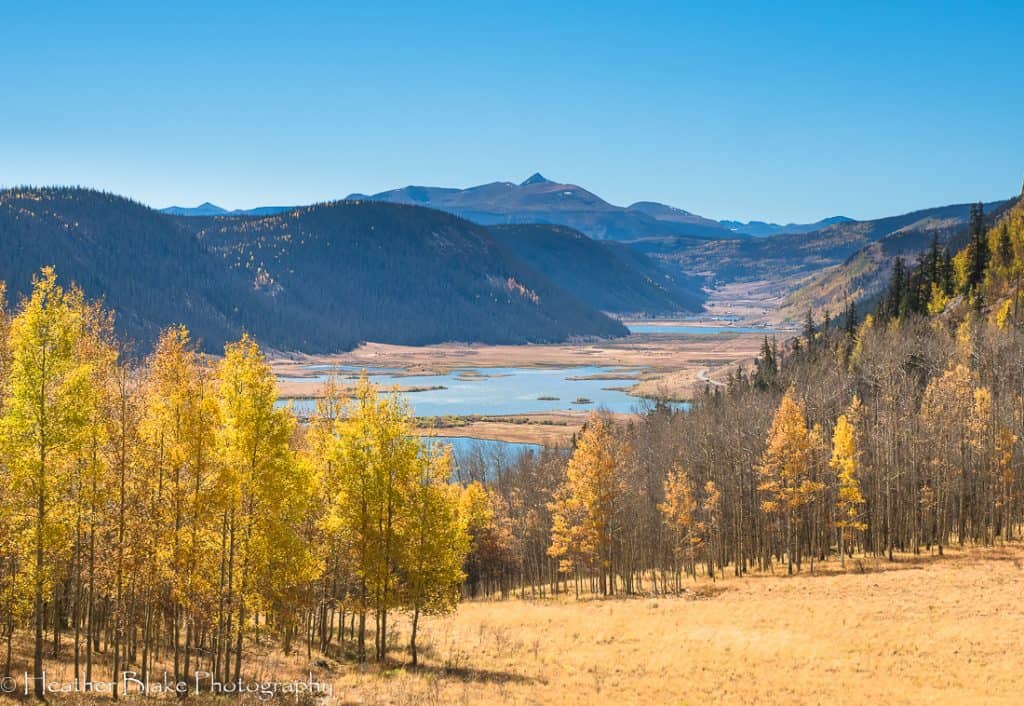 Wow! Check this out! Near Creede, you will find the headwaters of the Rio Grande River and a view of Uncompahgre Peak in the background! This is also a pullover where they talk about the historical significance of the Old Spanish Trail which this spot crosses!

Silver Creek is the endpoint of the Silver Thread Scenic Byway and is a stopping point for gas and a bite to eat. There is not too much to this town except for all the national forest access which is where we spent the night before continuing west towards Utah.

After leaving Silver Fork and spending the night in the National Forrest (there is a ton of camping in the area and up the pass, it is very well marked), we headed west on HWY 160 and over Wolf Creek Pass. Wolf Creek Pass is a spectacular pass in its own right. The road is high as it crosses the Continental Divide, it is also steep in spots and has a crazy turn at the bottom that you need to watch out for! Wolf Creek Pass also receives some of the highest snow totals in the state! It’s a remote and beautiful place and Wolf Creek Ski Area is always one of my favorite skiing destinations.

On our almost 3 week trip, we had one day that involved clouds with a light drizzle of rain and it happened to be the morning of this part of the drive! It sure made for some pretty pictures! 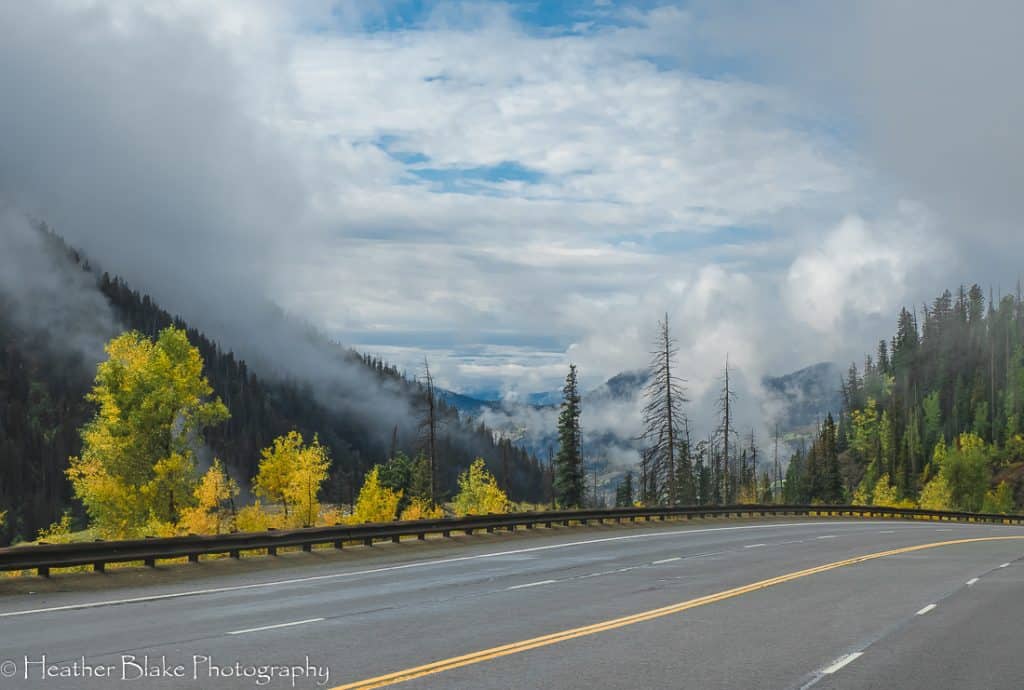 Mornings like this are best for sleeping in except when you are lucky enough to be able to take a gorgeous drive! I was in awe and felt like I was in a dream with this view! 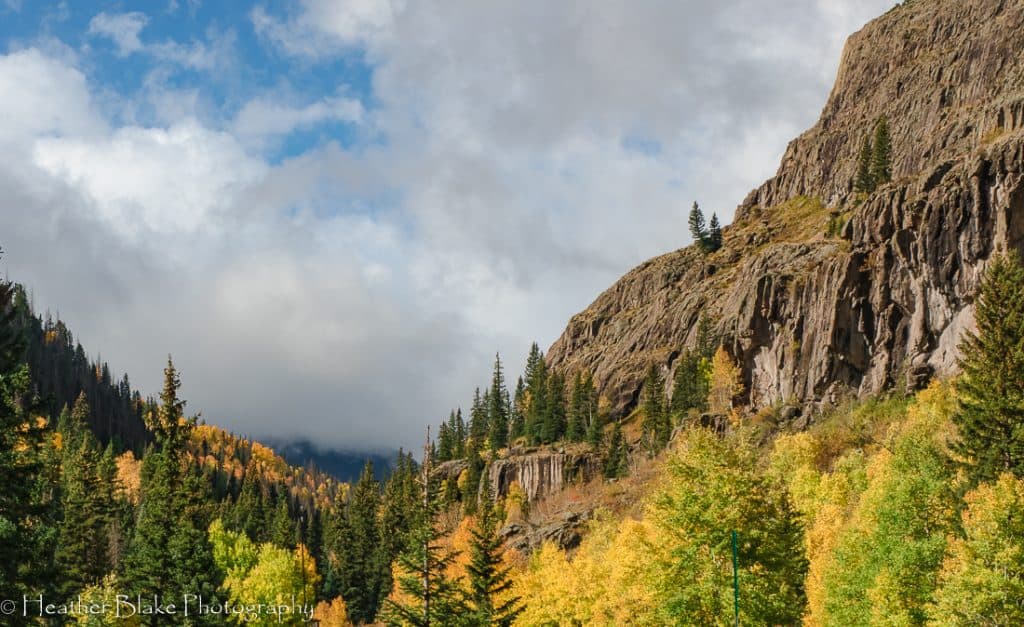 I love this picture of the clouds stuck in the trees. It was an unusual and beautiful sight!

We got lucky with the beautiful autumn weather and incredible views as we headed south and west! Follow along in future posts for our out of this world adventure in Southern Utah! We saw and did some things that we never thought possible which added to another spectacular trip!

I’ll end this post with some pictures of my most favorite organism on the planet, the Aspen Tree! Follow along in a future post as well, as we actually got to see the “Pando“! 🙂 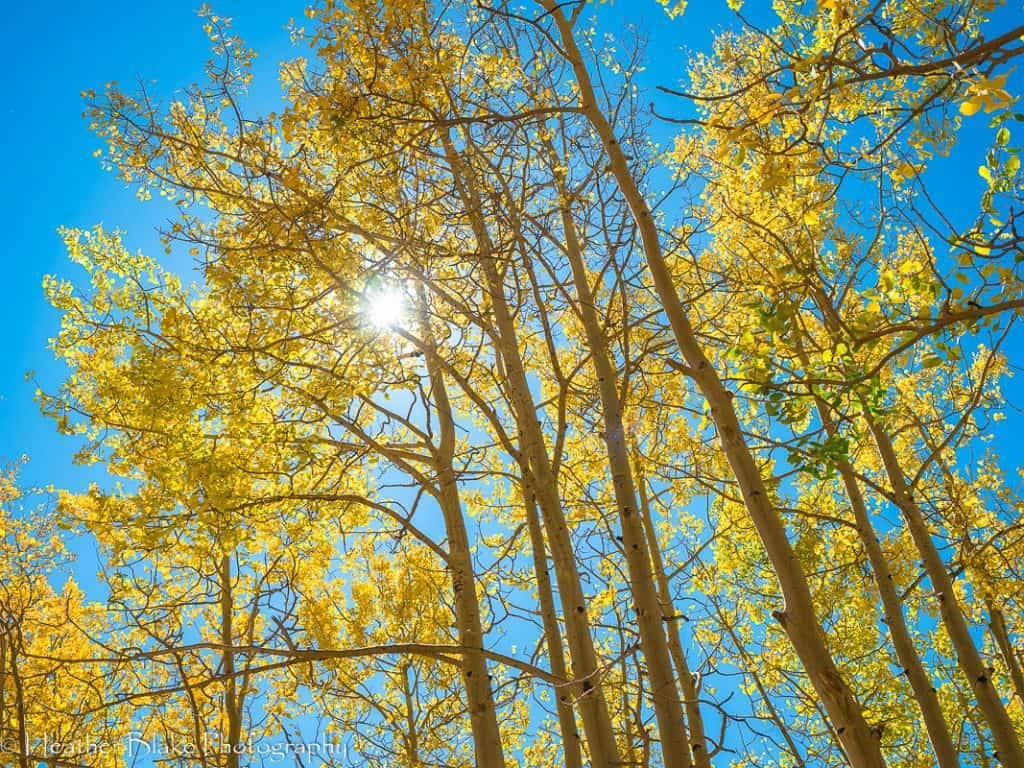 The contrast of the turquoise blue sky and the golden aspen trees was quite a magnificent scene! All-day, we said, how is it possible for a sky to be this blue? Well, this was for real! 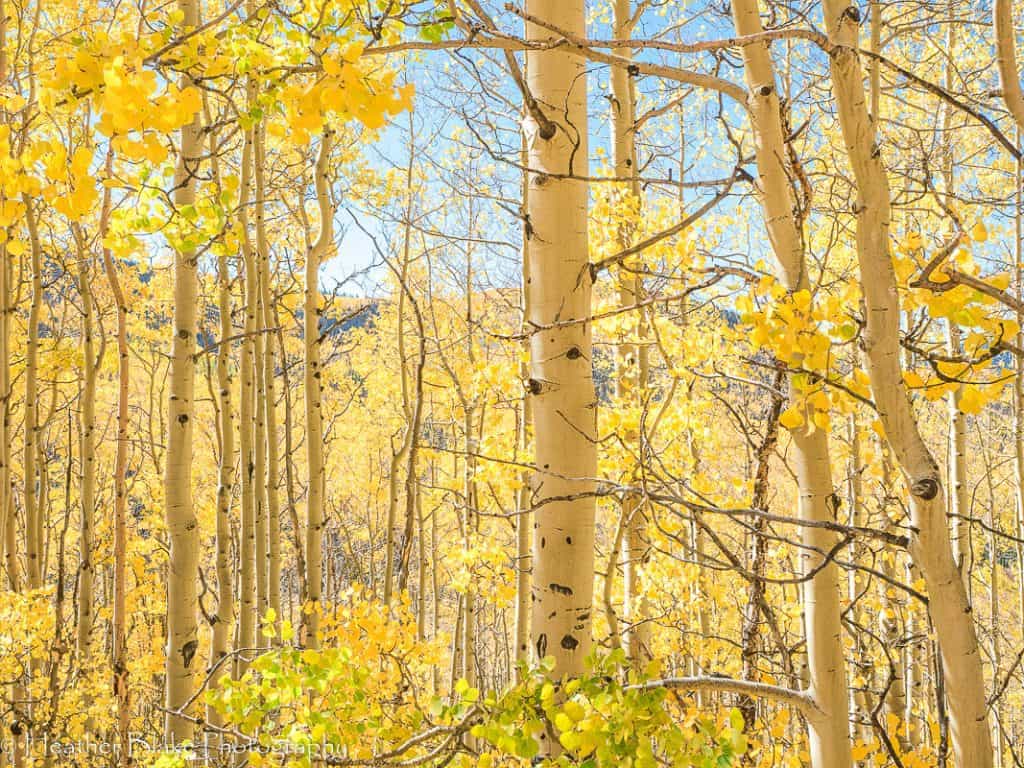 One of my favorite pictures to take is of an aspen forest changing colors. It sounds weird but the trees “speak” to me!

Here are some links for other great Western US Road Trips