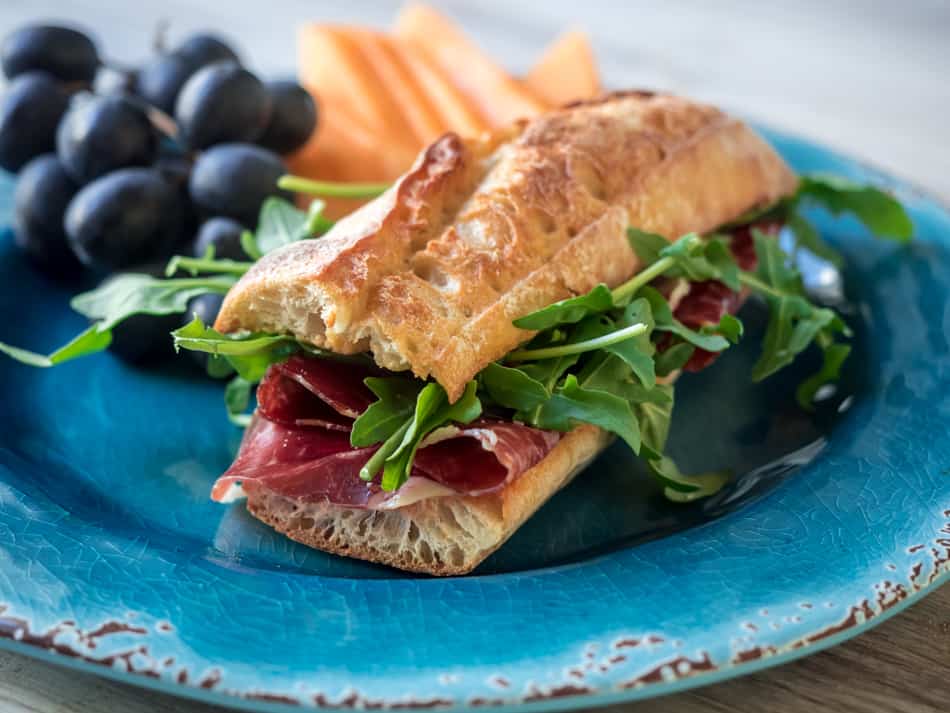 World’s Greatest Simple Ham Sandwich is a combination of two things that I loved to eat in Barcelona! Iberico ham and a tapas dish!

Well, I’m back from my trip and a little jet lagged from a giant European adventure!

Our trip started out in Barcelona, Spain. What an interesting town. It’s different other cities in Europe as it’s quite large and directly on the coast. I must say that seeing all the yachts was quite cool.  We visited a few markets that I loved. I so wish that Americans would shop this way. Imagine walking into a large, mostly open air, markets filled with stalls of items for sale. A place where you could buy ham and sausage, vegetables, cheese, bread, spices, seafood etc. I love it because each vendor has a story and only selling the freshest food available that day. It’s a beautiful thing. I would seriously go and shop every day and buy what I need if this was my shopping option.

We saw everything Gaudy as well. The fantastical Sagrada Família church was quite spectacular! Even though it’s still under construction it’s still awe inspiring. Besides being absolutely enormous, its architectural features are so impressive. Gaudy thought of everything and each detail down to the “beetles” that are carved into and who live on the massive solid wood doors into the church! The church completion is supposed to be in 2026, 100 years after Gaudy’s death. It’s just neat that the City of Barcelona has kept his vision alive.

I know I got a ton of texts but wanted to let everyone know that we were in Barcelona one week before the terrorist attack. I must say that the military presence with heavily armed personnel was very noticeable when we there. I guess there was a lot of “chatter” and they probably knew that something was going to happen. I’m just glad we were gone before it did. Scary being in a place on Las Ramblas where the attack happened only a week before and about the same time I was there.  Just lucky I guess but I do have a heavy heart for those who lost their lives to some pathetic cowards who commit these crimes. So sad for Barcelona.

We left Barcelona and headed out to the Balearic Islands off the coast of Spain and onto Italy. I’ll take about the Spanish Islands for this post and move to Italy next week! We made stops on Majorca, Ibiza and Menorca islands. All of the islands are as you can imagine. Beautiful white sand beaches, ice blue/green water, yachts galore, terrific shopping, fun wine tastings, lovely lunches, charming really old towns, interesting history and friendly people! It’s always fun to experience new places and these islands sure fit the bill. I’d go back to any of these islands in a heart beat!

Well, I guess that I should explain why this weeks post World’s Greatest Simple Ham Sandwich came to be and why it’s the world’s greatest! First off, the food in Spain was fantastic. I had no idea what I was in for but so happy that I got to experience true tapas style of eating and Iberico ham. I was in love with the ham and quite honestly had a few ham with arugula sandwiches in Barcelona! It was that good.

So let’s get to the World’s finest. Iberico ham is amazing and that’s all I can say. The pigs that make this ham are indigenous to Spain and have black hooves. They are only Iberico hams if they have black hooves. The little pigs are raised free range and eat grass, herbs, and acorns. They are then slaughtered and hung to dry for a least 12 months up to 36 months. The dry aging gives the ham this deliciously subtle and not too salty of a flavor. It’s divine as well it should be as it costs about $225 a kilo (about 2.2 pounds). Wow, that’s crazy expensive but worth every bite. Good news, a little goes a long way. You only need a couple of thin slices to satisfy your palette! Delicious.

My other favorite tapas in Spain was a simple dish. A toasted baguette, fresh garlic rubbed over the bread when hot along with an overly ripe tomato and a drizzle of extra virgin olive oil and a pinch of salt. They seriously just rub a ripe tomato over the warm bread! Ingenious. A beautifully simple appetizer that is served all over Spain!

This is how the World’s Greatest Simple Ham Sandwich came to be! I combined the world’s great ham with my favorite tapas! All the flavors come together in a way that brings me back to Spain! Give it a try! You may just agree!

Enjoy and stay tuned for more adventures from Europe!

World’s Greatest Simple Ham Sandwich
Recipe Type: Sandwich
Cuisine: Spanish
Author: Heather Blake
World’s Greatest Simple Ham Sandwich is a combination of two things that I loved to eat in Spain! Iberico ham and a garlic, tomato rubbed bread.
Ingredients
Instructions
Notes
Iberico ham or at least the kind we ate in Spain is impossible to find in the USA but my Kroger store sells it in the deli section of the store. (It’s expensive but worth it)!
3.5.3226

Iberico ham. If I could have one of these at home, I’d be one happy lady!

This could quite possibly be my new favorite way to eat bread! Toasted with garlic, fresh tomato, olive oil and salt. Unbelievably delicious!

These trips to Europe are an eating frenzy! No guilt when you eat like this though!

Wow! Enough said, possibly one of the best bites of food ever!

Not too sure why I have had steak 3 times so far! Except, maybe it’s just dang delicious here! I’m not quite sure what they do here, but I’d eat meat every day if it was this good at home!

Sangria, Ibiza style! Wow. Super light, refreshing and fruity! They make it with Cava (Champagne) and all kinda of tropical fruits! Including bananas! Delicious!

Tapas! Potato and egg on top of bread! OMG! This was amazing!

A great way to start any meal! Ibiza, Spain.

Paella! Totally different than I expected. I will make it when I get home. Got some tips for a regular kind! Not one laced with cuttlefish!

Now, this was good! Essentially paella made with noodles! This will be on my favorite food list for now on!

Figs, glorious figs! Just in season and just in time! So pretty!

I had never drunk vermouth before but when in Barcelona, you drink what the locals do! It was actually very tasty. Very smooth and a little sweet!

Inside of the Sagrada Família . Gaudy’s vision was to make the supports to look like tree branches! Wow!

The colors in this stained glass were simply glorious! Wow!

A beautiful coastline in Majorca, Spain.

The Jewish Quarter in Barcelona. These streets date back to the 13th century! I love how the walls lean out!

Because when you are lucky enough to see a bunch of grapes hanging in front of you… you take a picture!!!

No trip to the Mediterranian would be complete without a yacht! This one belongs to some Prince from Kuwait!