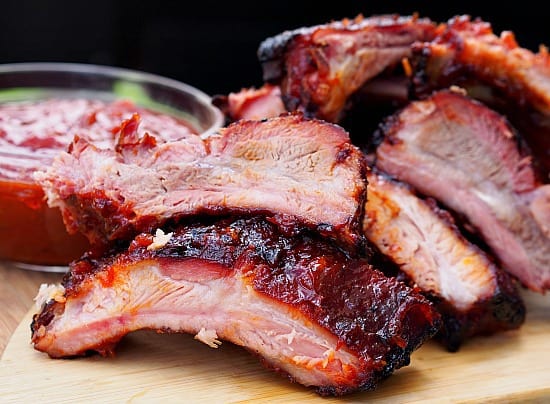 Me and my barbecued ribs with Garam Masala Barbecue Sauce… I’m kinda obsessed.

Last’s weeks “plan A” turned into this weeks recipe due to yucky weather! Yeah for me, I got to eat a bunch of ribs! So I know that you are wondering what the heck is Garam Masala? I was wondering the same thing as I kept seeing this spice mixture on the selves of the spice section at the grocery store, so I picked up a jar. What a pleasant surprise. While I’m not really a big fan of Indian food, I am a really big fan of the Garam Masala.  This spice mixture has “warm” flavored spices like, pepper, cloves, cinnamon, nutmeg and cumin among other things. After I tasted it, I immediately thought barbecue sauce. I love making barbecue sauce and dry rubs and garam masala  really adds a super nice flavor to the sauce. It has a little “kick” to it but it’s certainly not spicy. Just enough of a smooth flavor which is perfect when it’s all grilled up! I brought these ribs to my folk’s house on Mother’s Day and finished them off on their grill. My Dad couldn’t get enough of the sauce and loved the ribs. When Dad loves something and actually used the word “best”, you know it’s a good thing! Go outside of the box and give this recipe a try! It’s gonna be a new “go to” recipe for me!

This week I was invited by my good friend Lea Ann (Cooking on the Ranch), to attend a cooking class at Sur La Table. It’s been on my “to do” list for awhile now and when she said that they were teaching a class on how to cook on a salt block, I said, “let’s go”! I have always been curious about this type of cooking method and this was a perfect opportunity for us “foodies” to learn all about it! Geez, I had no idea that you could “cook” either hot or cold foods on a salt block, I always thought it was a “hot” food thing! When the chef brought out a bunch of cucumbers and had us slice them up and put them directly on the salt block, I was thinking, “really”? Really is right, really good! The salt block is such a versatile cooking tool that actually “flavors” your food while you cook! Man, the cucumbers take on this slightly salty flavor which is good anyway but when you add them to a salad with pickled onions and roasted peppers with a little balsamic vinegar glaze and olive oil, you might as well shut the front door. So delicious! I think that my favorite dish that we prepared was the watermelon salad though.  I know what the next thing is that I bring to a party will be! Slice up watermelon and put it on the salt block. After about fifteen minutes top it with olive oil, chopped fresh mint and feta cheese. It’s that simple to prepare but will knock your socks off with flavor! Holy cow, it just goes on. We seared scallops, made scones (in the oven), boiled potatoes in “salt” water (yum)  and even melted a bunch of chocolate on the salt block! Crazy amount of food and all crazy good! We learned a ton and now I’m a proud owner of a new kitchen tool! If you have a Sur La Table in your area, check out their class schedule. I actually think the classes are priced reasonably for the expert instruction and all the food that you get to taste! Definitely a fun way to spend an afternoon! 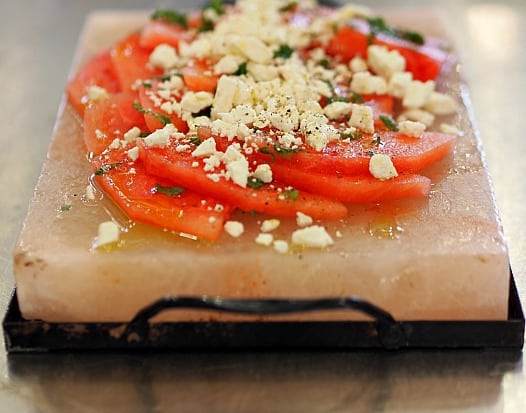 Whoa! Sliced water melon on the salt block with feta cheese, mint and olive oil! Holy crap this was good! 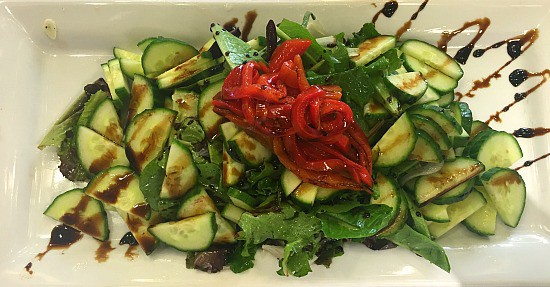 A cucumber salad that we let sit on the salt block. Absolutely one of my new favorite foods. Infact, I ate it for dinner last night! Oh my! 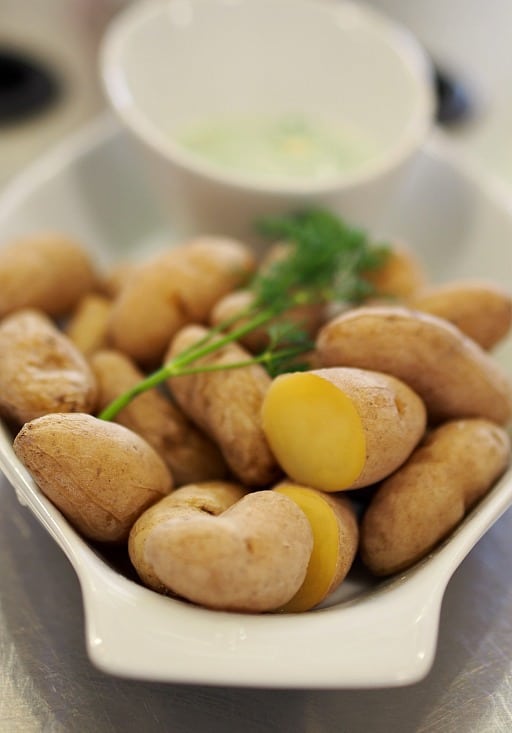 Fingerling potatoes with herb butter.. He seriously boiled the potatoes in water and like a cup of salt. Who would have guessed that these are some of the best potatoes that I have ever eaten. I really don’t even like potatoes and I’d eat these again for sure! 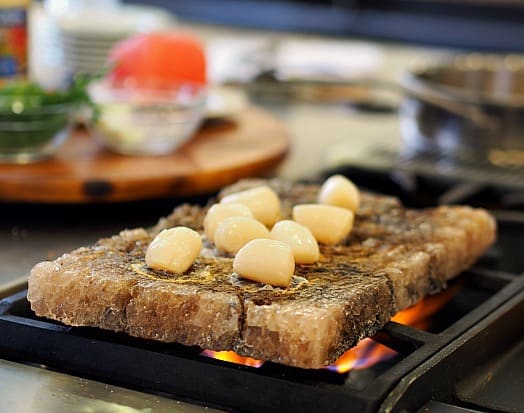 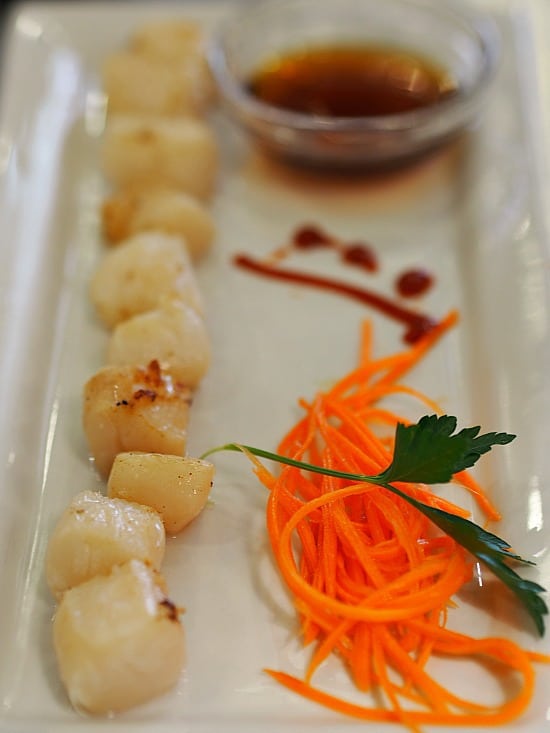 Yum, it’s not that often that we eat scallops in Colorado but when we do, we don’t cut corners. Yummy on the salt block! 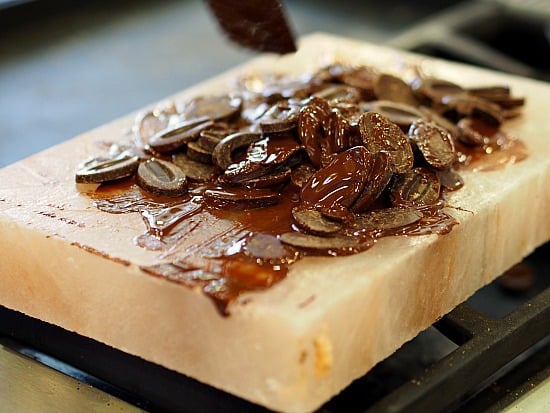 Who knew that you could melt chocolate on a salt block! What an amazing flavor that was added to all this melty goodness! 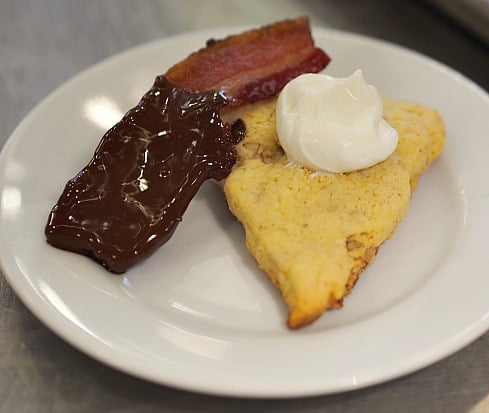