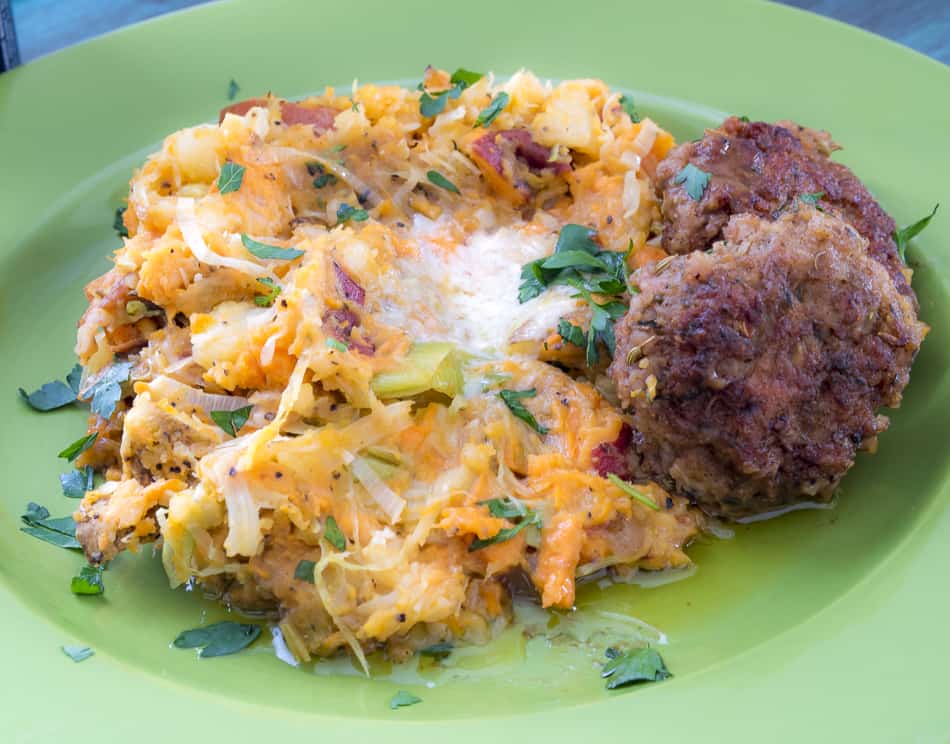 Colcannon with Irish Sausage is one of my new favorite meals! Something different to make for St. Patrick’s Day or serve along side your corned beef dinner!

Colcannon. What the heck is colcannon? Those were my thoughts exactly this week when I was trying to decide what to make in preparation for St. Patrick’s Day! Well, all I can say is that the Irish were up to something delicious when they started making this simple dish. Basically colcannon is mashed potatoes on serious steroids. Potatoes mixed with greens that could include, cabbage or kale and green onions or leeks. Typically, colcannon is served as a side dish to any meat (think corned beef), a ham steak or sausages. I have even read that colcannon is considered pub “grub” in Ireland. Can you imagine sitting in a pub drinking your favorite pint and eating a plate of colcannon with Irish sausage? Holy cow, you would have to roll me out of the bar due to carb overload! Ha!

I decided with my version to go off the edge and really mix it up as I am not a big potato eater (except french fries, I love french fries). I made my version with sweet potatoes (great flavor), regular potatoes, bacon, cabbage and leeks! Truth be told, I have never cooked cabbage in butter before. It takes on such a soft, sweet flavor that pairs great with leeks and bacon. Oh, the bacon isn’t a typical addition to colcannon either but as the saying goes, “everything is better with bacon”!  I just had to add it to my version of colcannon and I’m so glad it did. It’s addicting.

Let’s talk sausage. Irish sausage is not to be confused with a “banger”. Banger is an English term for sausage and from what I have read, it’s offensive to call on Irish sausage a banger. So it’s not a banger, it’s a sausage… Anyway, Irish sausage is a combination of ground meat (I used pork), a “binder” (bread crumbs), eggs and various herbs. I know you have probably never thought about making your own sausage but why not? You can make it just about as fast as you can unwrap the package of a store bought sausage and bonus points, you know what exactly is going into the finished product! Making sausage patties is perfect for the home cook as most of us don’t own one of those sausage making machines or let alone have a box of sausage casings laying around! Sausage patties rule in my book!

Make up a big batch of colcannon with Irish sausage for your St. Patrick’s Day festivities. Heck, you may love it so much that It may make it’s way to your Easter table as well!

Quick side note, I’m gonna be MIA for the next couple of weeks! Don’t be sad, I’ll be back with an enormous adventure to tell you about!

Colcannon with Irish Sausage
Recipe Type: Main Course or Side Dish
Cuisine: Irish
Author: Heather Blake
Serves: 4-6
Colcannon with Irish Sausage is great as a meal or serve along side your favorite corned beef dinner! You don’t need to make the Irish sausage if you just want a great side dish! The sausage is great along side your favorite egg dish as well!
Ingredients
Instructions
Notes
The potatoes should yield about 2 pounds. [br][br]Tip for cooking the sausage. Take a couple of teaspoons of the pork mixture and fry in the pan before cooking the whole batch. Taste it to make sure the seasoning is on point. If not adjust the seasoning before cooking the remaining patties.
3.5.3226
« Warm Salsa Fish Tacos with Avocado Cream Sauce
Locro de Papa (Ecuadorian Potato Cheese Soup) »