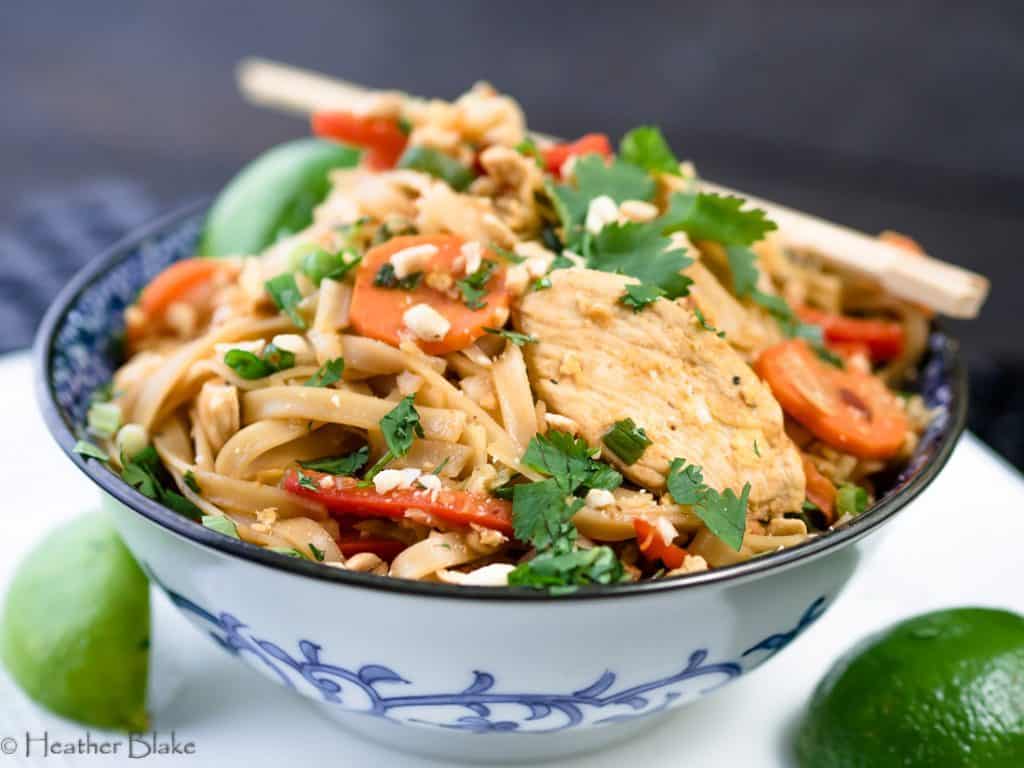 Hello, Y’all! Well, it happened in Denver this past weekend. We got a proper snow storm. Yep, snow that accumulated more than an inch. We actually got a solid 8 inches at my house. Super exciting considering how dry it’s been. I love it, my dog Tommy, not so much…

This weeks craving was Pad Thai. I seriously had a hankering for a sweet and sour, umami-rich dish. I was dreaming of noodles, lots and lots of noodles. Instead of hitting up my local Thai restaurant and indulging on a massive carb loaded overly salted plate of pure heaven, I chose to stay at home and make my own version of a healthy chicken pad thai instead.

My version of pad thai is definitely Americanized to accommodate what ingredients that we have available at our grocery stores. In a traditional pad thai, one would use tamarind paste as the sour component of the dish. After visits to 3 different stores with no luck finding it, I decided that it was a fruitless task. If I can’t buy it in the land of everything at your fingertips, then there is no way that it would be easily accessible for others. I used rice wine vinegar and a bit of brown sugar as a substitute. (Plum sugar doesn’t exist in my area as well). Lol!

Now that I am really changing things up, I might as well mention bean sprouts.  They don’t sell them here either. The produce manager says they spoil to quick, so they don’t stock them. I included them as an optional ingredient on the list. If you can get them, it would be a nice addition.

Finally, I made this pad thai super healthy by loading it up with a ton of non-traditional ingredients such as peppers, chilies, cabbage, and carrots. I also upped the eggs and added more chicken for extra lean protein, as well as, cutting down the number of noodles that would a traditional pad thai would be made with. All and all, I think that I succeeded in making a super flavorful pad thai that you don’t have to feel guilty about eating.

Next time that you are craving a delicious pad thai takeout, try making this instead. You can certainly make it faster than the delivery guy can make it to your house. Your waistline and belly will thank you! 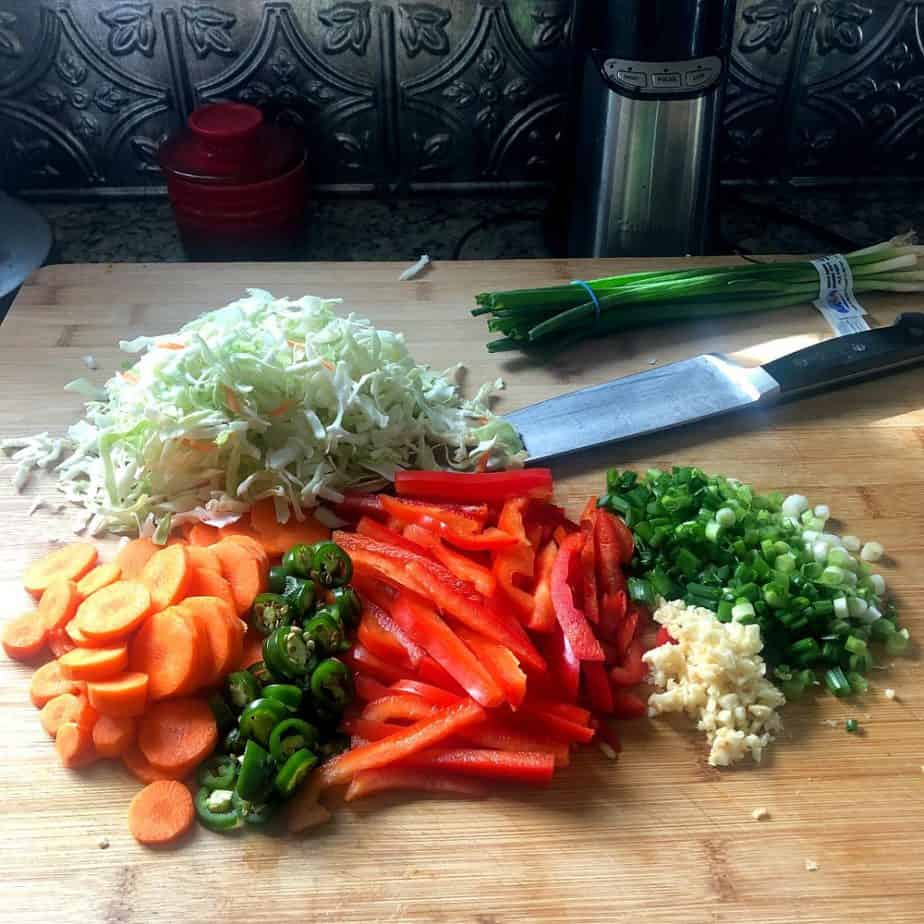 When making pad thai it’s easiest to pre-chop everything. The cooking process is pretty quick, so this step will make it a bit easier. Go ahead and chop away! 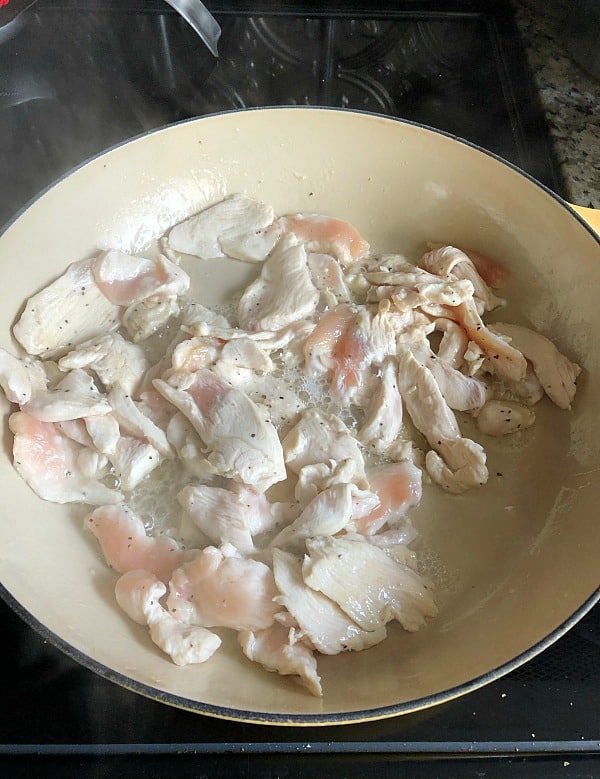 To avoid dried out chicken, cook it to this stage and then add the vegetables. 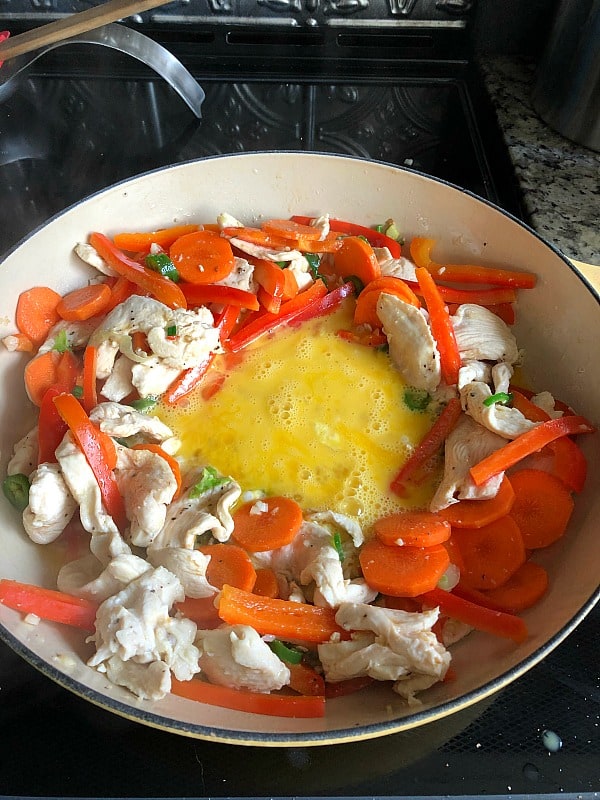 After the chicken and veggies have cooked, push them aside and put the eggs in the middle. Gently swirl the eggs around until they set. Then toss together with the mix! 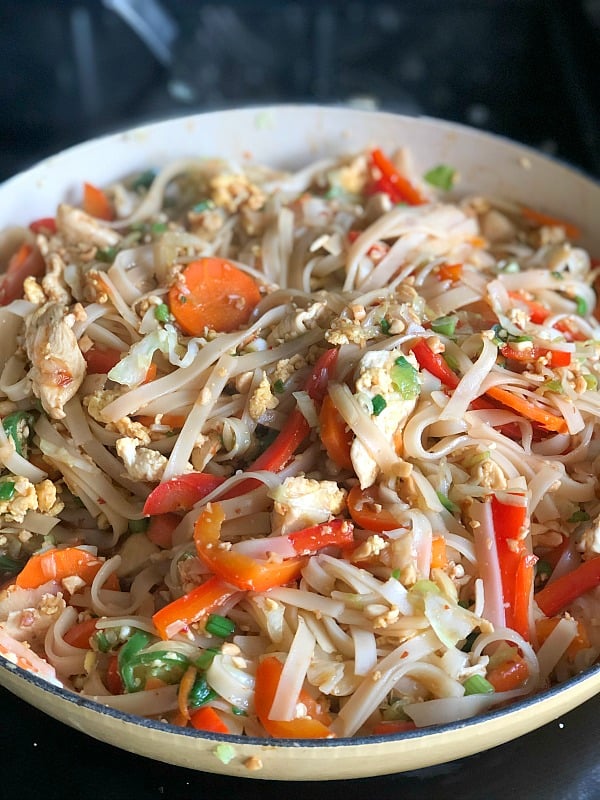 Once the eggs are cooked through and mixed in, toss in the noodles, peanuts and green onions. Now it just needs the sauce and it’s ready to serve. 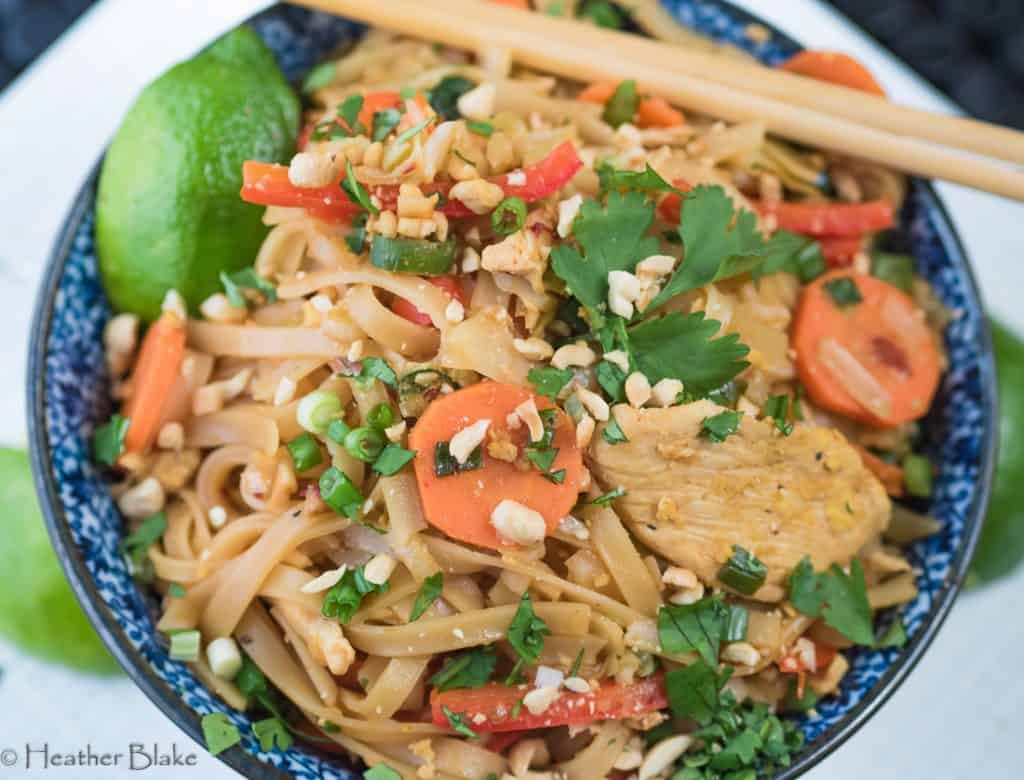 Healthy Chicken Pad Thai is one of my favorite go-to dinners! Go figure, it makes for great leftovers too! 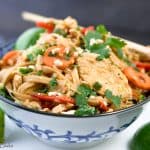 For the Pad Thai Sauce

For the Pad Thai

For the Pad Thai Sauce

To make the Pad Thai

To thinly slice the chicken, try putting it in the freezer for 15-20 minutes before cutting. It will firm up just enough to make slicing easier.
« Chicken Cordon Bleu Pot Pie
Big Southwestern Road Trip »