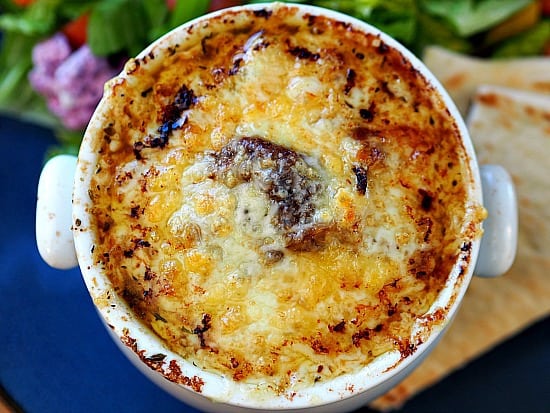 French Onion Beef Soup is not your average French Onion soup, it’s jazzed up like 1000%! Extra meat and extra cheese make this soup over the top!

It seems as though most of the country is covered with snow now! Wow, that was quite a storm that blew through. I feel bad for my friends who live in the South. I’m sure that they have been in “holy cow, now what do we do ” mode! This was only our third round of snow this winter in Denver. We only got a few inches so it’s really just more of a nuisance. The below zero temperatures were horrible but now we are back to having our 50 degree days so all is good in paradise! Good news though, the ski resorts are getting dumped on so I can start thinking about dusting off the skis!

While we were confined to our homes on Thursday because of snow and minus seven-degree temperatures, I needed to make soup. I seriously needed a hot bowl of soup! I have been craving French onion soup for quite some time now and Thursday seemed to be the perfect day to make it and oddly enough, I had all the ingredients on hand!

While I was pondering a recipe to makeup, I thought of a couple things that French onion soup lacks. One, there is never enough cheese and two, where’s the meat? One pet peeve of mine is when you eat a hot bowl of French onion, once the cheese is gone, so is the joy. So why not put a handful of Swiss cheese in the bottom and on the top of the bowl? This way every single bite has the melty cheese in every bite! Genius!

Along with my cheese issue, I like to eat soup as a meal. Typically French onion soup is always on the appetizer menu, why not add some chunks of hearty meat to make it an actual meal? Well, I solved my dilemmas with these two additions. Finally, I’m in the boat that the bread that goes into the soup gets too soggy for me. I omitted it from the soup and just served it up with a hunk of French bread on the side! Delicious if I do say so myself!

Are you looking to try another kind of French onion soup? Give my French Chicken Onion  Soup a try! 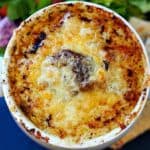 To make the Soup

To Assemble the Soup

Notes
Serve with crusty bread and make it a meal with a crisp green salad.
3.5.3229

Caramelized Onions are easy to make, it just takes time! Worth every minute of it!